Lord Cù Allaidh Dona and the Tale of the Dancing Cup 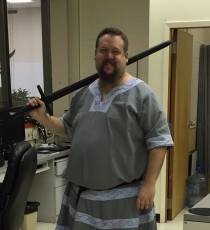 I figured what this blog needs is a dose of humour, and since a man who firmly believes in the old addage “Laugh at yourself and you will never cease to be amused” I will tell the tale that my fiance loves to bring up to anyone new who meets me in the SCA. I suppose for those who are reading my blog but are not familiar with the SCA I should give some background. The SCA is a medieval reenactment group that is focused on Pre 16th century European court. One of the more popular activities is Heavy Combat, or sword fighting in full armour using rattan swords. We use rattan because they mimic the approximate weight of an actual steel sword while minimizing the risk, the swords aren’t padded, so they do hurt if you get hit in an area that is not substantially covered with armour. If you wish to read more read my Beginners Guide to the SCA.

It all began at an event called FOOL or “Fruits of Our Labour”, the event was primarily a teaching event rather than marshal, but that year they planned a torchlight tournament which I thought would be fun, so I brought my armour, or so I thought. It turned out I brought all my armour except my shield, a pretty crucial bit of armour. I managed to borrow a shield from a friend who was not fighting in this tourney as she was taking on a entourage duty at that time (basically walk around with the “King” and/or “Queen” and be all official like).

I began the labourious task of armouring up for battle. When putting my helm on it slipped and slammed into the bridge of my nose leaving quite a nasty gash. Still unperturbed and determined to valiantly fight any foes I quickly ran to the washroom and cleaned up my wound. Upon my return to the field I found that the marshal had examined my helm and found it lacking padding thus declared it illegal to fight in the tournament in that helm. I was crestfallen, I was all geared up but no headgear. Luckily the then King of Ealdormere (Ontario, Canada) was watching and graciously loaned me his helm. The helm fit perfectly snug and tight.

So, finally, the tournament began. There were only four combatants so it was determined the fights would be several rounds of best two out of three. I won the first bout, lost the second, but won the third, meaning I was moving on to fight the winner of the other pair. I lost the first bout, and won the second, it was on the third bout, both myself and my opponent were struggling, fighting our hardest. I knew this opponent well I had fought him many times in practice, but until today I had never bested him, so I was on a high after beating him in the second fight of the second round. We were fighting hard my sword swung at an opening, and I saw his sword coming towards an opening created by my swing, I knew I could not block it, I could only hope his shot would be glancing and mine would would strike true, but we will never know, a hold was called and we stopped. The marshal cried out that there was a foreign object on the field and everyone stopped to see what it was (tripping hazards could be quite dangerous in armour). It appeared someone’s protective cup had made its way onto the field, that is when I noticed a distinct lack of pressure on my groin where my cup should be protecting me from harm. I admitted that the cup was mine, though I have no idea how long it lay there, nor how it managed to come out of it’s strap, but it meant that I would have to do some impromptu equipment repair before I could continue.

I went to remove my borrowed helm to discover that the helm was a little too perfectly fit for my head. The chin strap would not go over my nose. It took a knight, a baron, and a King to pry the helm from my head, yup three men to remove one helm from my massive cranium… Prior to this my SCA name was just Cù Allaidh, but I decided it important to add a descriptive byname to this (before someone else did) Dona means “The Unlucky” thus I became Cù Allaidh Dona