My Indiegogo Campaign for Senet

I have started an indiegogo campaign to raise funds to purchase some custom pawns to make a Senet board to sell here online and at SCA event, craft sales, and farmers markets. Drop by the Campaign and donate. Every little bit helps. 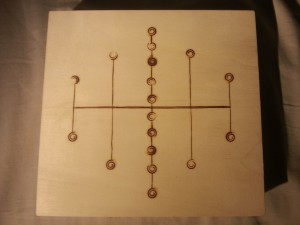 The prototype board for the game of Five Lines

Part of the plan with Past Times is also to develop and sell game boards. I have begun working on some prototype designs and am ready to unveil my first prototype. The Game of Five Lines is the first board I am ready to reveal. It is a simple race game where the goal is to get all pawns onto the “Sacred Line” which is the centre line. The game begins with each player having five pawns, one on each line on their side of the board. The pawns are moved clockwise around the board with the goal of getting all of the pawns on the Sacred line on the opposite side of the board.

The game can either use one die or four casting sticks to determine how many spaces a pawn may move on a given turn. Once the die is cast a pawn can move the number of spaces shown, but cannot land on an occupied space with the exception of the sacred line, the sacred line can house as many of either sides men as necessary. If there are no valid moves then the turn is lost, however if there is a valid move then it must be made, even if it means moving a pawn off the sacred line forcing the pawn to go around the board again to get back to the Sacred Line.